FEE’s mission is to offer the most consistent case for the “first principles” of freedom: the sanctity of private property, individual liberty, the rule of law, the free market, and the moral superiority of individual choice and responsibility over coercion.

This years marks the 50th anniversary of FEE seminars. Students selected to participate receive a fully-funded seminar experience courtesy of FEE and from the generosity of private donors. The seminar that I am attending is on current events. Throughout the week we have been listening to lectures and engaging in debates on such topics as: healthcare, immigration, the environment, taxation, monopolies, education, the welfare state, foreign intervention, and urban planning. 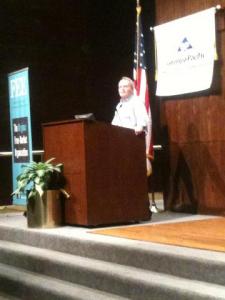 The seminar began with a lecture by FEE President Lawrence Reed. He delivered a lecture titled: Seven Principles of Sound Public Policy. He began his talk with a fun story called the Louisiana Land Title legend. Then, he proceeded to share with us the inspiring story of entrepreneurship of Will Kellogg.

The first principle of sound public policy that Lawrence Reed outlined is: Free people are not equal and equal people are not free. By this he is not referring to equality before the law or equality in terms of human dignity. He is referring to the natural inequality of talents and initiative found among human persons. He highlighted the contradiction in proclaiming “Vive la différence!” while, at the same time, seeking to promote egalitarian socialism. Socialism is a proposal to make people what they, by nature, are not. The socialist starting point is an utter fiction about the human person.

Lawrence Reed spoke to us a bit about incentives. Nobody takes care of somebody else’s property as carefully as he takes care of his own, Reed explained. “Have you ever heard of someone washing a rental car?” he asked. Reed shared with us a story about a club that he belonged to that would meet regularly at a restaurant for dinner. For the sake of simplicity, the bill would be divided evenly between the members equally. However, soon they began behaving like socialists. Members began ordering the most expensive meals on the menu because of the knowledge that their fellow members would be subsidizing their meals. When members began ordering lobster (subsidized when the bill was divided by those who ordered ceasar salad), the club became known as The Lobster Club.

Copies of the constitution were pulled out during our lunchtime debates.

Liberty is what makes us human and liberty makes life worth living, said Reed. We should aspire to be the unique and sovereign individuals that we were created to be. With liberty, we can be what we are. And “the happy life is joy in the truth.” We fufill our human purpose by living in accordance with the truth of who we are. Reed said that in 1776, government was dethroned and that, depending on our view, the creator or the individual was put in the place of government.

Anybody can be a socialist, explained Reed. All that it takes is wanting something that doesn’t belong to you and encouraging the use of coercion to get it. Liberty, on the other hand, requires that we live up to some pretty high standards. Liberty is an indispensible condition for a life of virtue. Reed encouraged us to strive to advance liberty. “Be special. Be different. Be an example.” Let us embrace the moral adventure, advancing liberty for the sake of freedom for excellence.

Thank you to everyone at the Foundation for Economic Education and to Jim Beley for making this opportunity possible.