Acton University is a four-day exploration of the intellectual foundations of a free society. An initiative of the Acton Institute, Acton University draws hundreds together in Grand Rapids for an ecumenical conference on morality and markets.

Upon arrival to the airport, I struck up a conversation with a young woman named Sarah-Beth. She is a Master’s student at Louisiana State University. Making the typical introductions, we learned that we have a great deal in common. We are both studying political science with an emphasis on political theory and we both take a great interest in bioethics.

After registering at the conference, I settled into the hotel. There I met my roommate Tessa from Seattle. She studied international relations and now works at a think tank called the Discovery Institute.  We discussed American and Canadian politics and quizzed one another on the historical basics of our respective countries. After she kindly converted the forecast into Celsius on her computer for me, we got ready and returned to the Devos Convention Centre for dinner.

The room was filled with more than eight hundred conference attendees from about eighty different countries. Acton Institute Research Director and emcee for the evening, Samuel Gregg noted the diversity of attendees highlighting that there were Catholics, Protestants, Jews, Muslims, Orthodox, and Straussian participants. In fact, this was my first conference during which people teased one another about being Straussians or Voegelinians.

After Dr. Gregg’s introductory remarks, Acton Institute Founder Fr. Robert Sirico hosted a conversation with Ambassador Michael Novak. As a theologian, author, and former United States ambassador, Novak brought a wealth of experience, insight, and joy to share with all of us.

Ambassador Novak reminded me of Preston Manning. Novak spoke about his life, work, and faith in a manner that was humble, down-to-earth, and friendly. He spoke about growing up in poverty and said that he wrote articles to make enough money to get by. Novak said that he became a critic of the left from the left and did not have a road to Damascus conversion to conservatism. He noted that it was initially because of the abortion issue that he became a Republican. A lover of truth and order, Novak learned that there is not a need to have a command system to achieve order. In fact, such systems are essentially opposed to ordered liberty.

Novak described his experience of losing friends over his principles and clashing with his own publisher who argued against publishing his book with “capitalism” in the title. Yet, The Spirit of Democratic Capitalism became his greatest masterpiece and was published underground in Poland in 1984, and after 1989 in Czechoslovakia, Germany, China, Hungary, Bangladesh, Korea, and across Latin America.

The best indicator of genuine development, explained Novak, is how many small businesses are being created. He insisted that education, low-interest credit, and the ability to incorporate businesses quickly and cheaply are among the key development solutions oriented toward promoting human flourishing.

A question was posed to Novak about Vatican II. Ambassador Novak said that he was in favor of the mass in the vernacular, but reminded us that it was not expected that the Latin would perish. He emphasized the elevation and succinctness of the Latin that requires a special mental discipline and contributes to the liturgical beauty. Novak said that people who do not experience the Latin mass are likely missing out. He also made a few remarks on his general views of the English language; he called English “a down-to-earth language with a natural Aristotelian bent.” 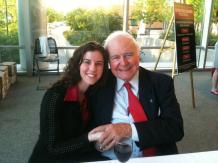 After his keynote, I had a few minutes to visit with Ambassador Novak. He grasped my hands in a warm, grandfatherly way. I told him that when I was in Cuernavaca in Mexico, I insisted on a Spanish speaker translating a few pages of his book Will it Liberate? aloud to me. I told him I was starving for some common sense in order to help me deal with the troubling liberation theology that I had confronted down there during Easter. He smiled and said, “Who would have known that my book would help put a pretty young woman to sleep?”

In the evening, I visited with many of the Acton University attendees. We discussed theology, politics, economics, history, the evening program, and the sessions that we anticipated in the week ahead. It was energizing to be among a crowd of people so motivated in striving for a civilization of love, a culture of life, and a free and virtuous society.